About writing in another language—and how it helped to improve my Native one.

I travelled to the UK in 2015 to study Project Management and to get my IELTS score, what should help me course Business and Administration the following year. I had a great plan, a great (although tight) schedule, just the right amount of money, the right energy, the positive thinking and the confidence of a 23-yo whose loving family was always supportive of her realistic goals.

But the will to continue.

(Sigh) I guess life is full of surprises!

There, in a small city near the British coast, among castles, beautiful vistas, sceneries, mashed potatoes and an enthralling history, I felt I would never complete that Business and Administration Course; I knew I would go back home (broke, after spending all my money) and write. And write. Then write.

I knew I would become a writer.

And I did! I was still in England when I started my first novel, “‘My Sharona’ your ass!”

—and ignoring also they have completely different structures and grammar rules and slang words and idiomatic expressions and etc—when writing in another language, you have also to consider your readers, your characters, the place they live in and, mainly, their language.

But… My English, at the time, even though I’ve been studying it for ages, was not in its best shape, considering how little and how dully I used it. Who needs Creative Writing techniques to write a contract or manage a project, anyway?

Ahh, but there I was: Decided! ‘I’m a Brazilian and my very first book will be written in English.’ It was great, I thought! I could practice, I could study and, at the same time, I could tell the stories I’ve always dreamed about! And sure, it was a dream to write it—until I noticed how difficult it was.

You see, ignoring the fact English has Anglo Saxon roots, while Portuguese has Latin roots, like French and Spanish—and ignoring also they have completely different structures and grammar rules and slang words and idiomatic expressions and etc—when writing in another language, you have also to consider your readers, your characters, the place they live in and, mainly, their language. Because, of course, a teen in Brazil and a teen in the States live different realities and it translates to the way they think, act, speak! It’s almost like a second and third layer of difficulty that, in all honesty, all of us, writers, face all the time!

After all, we need to know and understand our characters so we tell their stories the best way we can, no matter where they’re from and no matter in what language we write. We know this, right? Still, to be honest, I had never really *felt* this so strongly as when I started to write in English!

Writing in this beautiful language forced me to pay attention. Forced me to learn, study and to READ like a WRITER. Most often than not, I’d catch myself making notes while reading, rereading old titles, and buying books in their original language, to compare with the translated version and understand how the writing worked in them—and why! That, alongside hours of online courses, unending editing and a whole lot of training, made me apply the same ‘studying techniques’ and the same level of attention to my own language, my beloved Portuguese.

Needless to say, I can’t even compare my writing now with what I did back in 2015, even in my native tongue!

And sure, I still have a lot to learn and improve, but the thing is: I used to say English helped to express myself better—but, I guess, what really happened is that English taught me how to think the language I’m using. And hell, if I’m happy for that!

Here’s a suggestion, then: try writing something, anything, *directly* in another language. THINK about it. About the structure, about your setting, about how to cause the most impact on your reader! Soon, you’ll hopefully be paying a lot more attention to all that, just like happened to me! 🙂 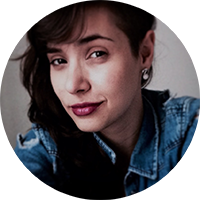